The first recorded history of the Mount Laurel Police Department occurred in 1938. This was sixty-six years after the incorporation of Mount Laurel Township. However, this force was only in existence for seven months. An old, anonymously written news article sheds light on this early brief history.
1930's

January 1st, William T. Nardin was elected to the Township Committee. Upon his urging, the Committee created the police force and named Nardin the first Director of Public Safety. At that time, a budget of $1000 was established for three “special” officers, one of which was always on call. 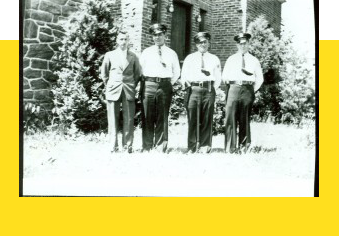 All officers hired were sent to Woodbury for a 16-week training period trained by the New Jersey State Police.

The men were sworn in on June 1st, after the training period was completed. In addition to being expected to risk life and limb, the officers had to buy their own uniforms, operate their own cars, buy their own gasoline and oil and make their own repairs.

For their service, they were promised $100 to split among themselves at the end of the year. After seven months of service, the Township Committee voted to eliminate the police force by a vote of 2 to 1. William Nardin was the lone supporter of the Department. 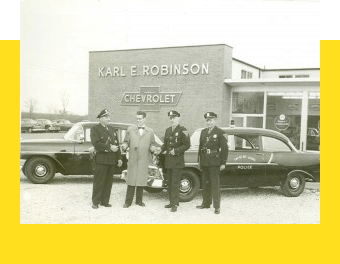 Full-time Police Force reactivated by Township Resolution. The police department was reorganized and Constable Tony Panarello was named as Chief of Police. Police headquarters was located at the residence of Chief Panarello on Church Road in the Fellowship section of the Township.

Four officers were hired. The first police cars were two new 1956 Chevrolets. The vehicles were solid black in color with four on the floor. Each had a single red-light mounted on the roof and plain Lettering on the doors that displayed “Twp. of Mt. Laurel Police”.

The police station was later moved to Old Farmers Hall located at Moorestown Mount Laurel and Hainesport Mount Laurel Roads. It consisted of a small corner office on the bottom floor of the building.

The 2nd floor of the building was a meeting room where town business and municipal court sessions were held. Throughout the 1950’s, the community remained a quiet rural and residential area consisting mostly of farms with horses, cattle and crops. 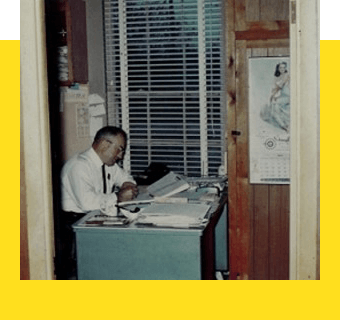 In the 1960’s, the Mount Laurel Police Department was still only a small department in Burlington County. The Department’s phone number was BELMONT 5-2903.

The phone was controlled by a toggle switch located at the Farmers Hall that switched calls to the Moorestown Police Department while the station was unmanned. 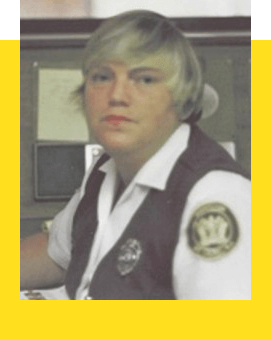 The duties of the officers expanded to include crime prevention and public relations details such as lecturing in the schools and performing bank escorts for merchants.

The 1960’s began new growth within the Department with the hiring of several new officers.

The uniform consisted of a grey tailored shirt with a triangular patch on the left arm, electric blue tie, dark blue trousers and matching electric blue striping with a dark blue blouse and leather gear consisting of a Sam Brown belt with swivel holster and bullet holders.

By the end of the 1960’s, officers were paid $4,700.00 per year. They worked a rotating schedule 6 days on and 1 day off and rotated shifts on a weekly basis. Officers were required to live in town. The on-duty officer picked up the relief for the next shift. If no relief was available, the on duty officer worked the entire next shift.

The police station and the office of the Police Chief was still one small room with a desk on the first floor of Farmers Hall. This office was used for everything including processing prisoners and writing reports.

The six officers had lockers on the first floor, but rarely used them since they reported to work in uniform from home.

Ernest Severs was the Presiding Municipal Court Judge. There was no prosecutor and there was no such thing as Miranda Warning.
MUNICIPAL COURT

In 1969 Chief Tony Panarello retired. The Department consisted of 12 officers and 4 dispatchers.

In 1969 The Township Committee replaced the Chief of Police with the position of Public Safety Director. Donald Ebert was appointed and later resigned in 1972.

The Police Department began a rapid growth in size in attempt to keep up with the increase of building of Larchmont, Ramblewood Farms and Birchfield developments as well as the population within the Township.

In the 1960’s and 1970’s prior to the Breathalyzer, those arrested for DWI were taken to Moorestown Police Department where they were given a Drunkometer test.

In 1971 Sgt. Larry Maio and Sgt. Jack Rizer were the first officers in the Mount Laurel Police Department to be trained on the Breathalyzer.

The Breathalyzer 900 was the first instrument used in Mount Laurel to detect alcohol. The model 900 and 900A were used until October 2005 when they were replaced with the model MKIII Alcotest used today.

The Department consisted of a Director of Public Safety, 20 officers, 4 full-time and 1 part-time dispatcher.

The Municipal Township Budget allocated $300,000 that covered the salaries and expenses.

The police department had a fleet of 9 vehicles, its own radio equipment (unique for a town of this size) and a control board for burglar alarms.

Director Ebert resigns, Sgt. Larry Maio was appointed as Acting Chief of Police until the Township appointed a Director of Public Safety in 1972. 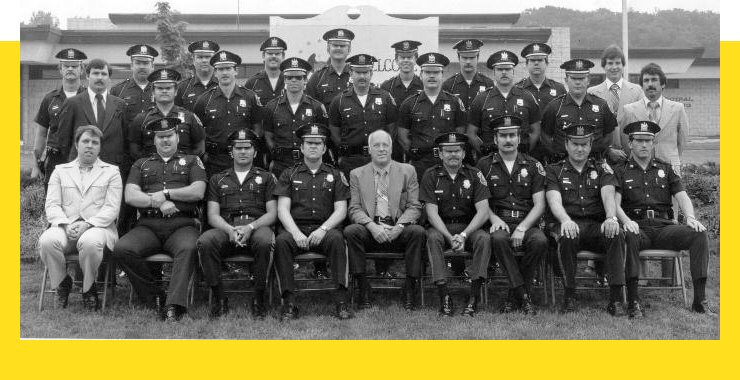 The Township continues to grow and the Police Department now has 29 Officers.
1980’S

First Bullet Proof Vests Issued to officers and were donated by The Mount Laurel Rotary.
1985: 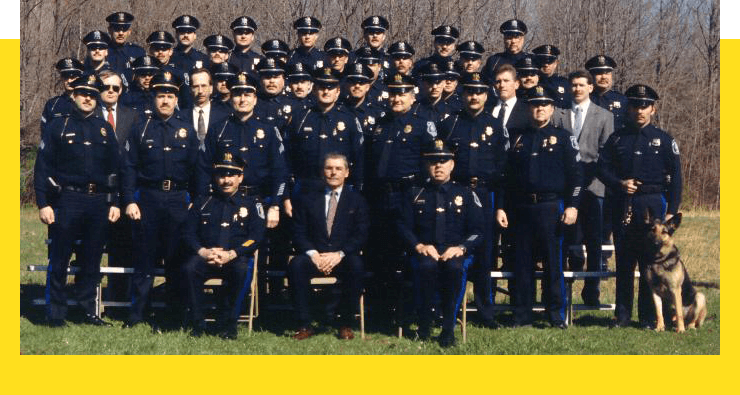 The Department, now up to 46 officers included 2 Lieutenants and 4 Sergeants.
1990’S 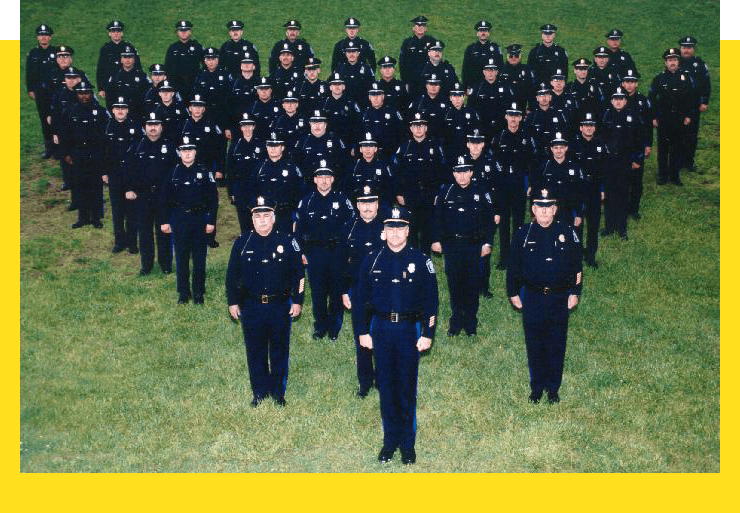 The complement of the department is 74 Police Officers to include Chief, Deputy Chief, 4 Lieutenants, 10 Sergeants, 4 Detectives and 54 Patrolman. Creation of Deputy Chief and Administrative Lieutenant Positions First Mobile Video Recorders in Patrol Cars
2000: 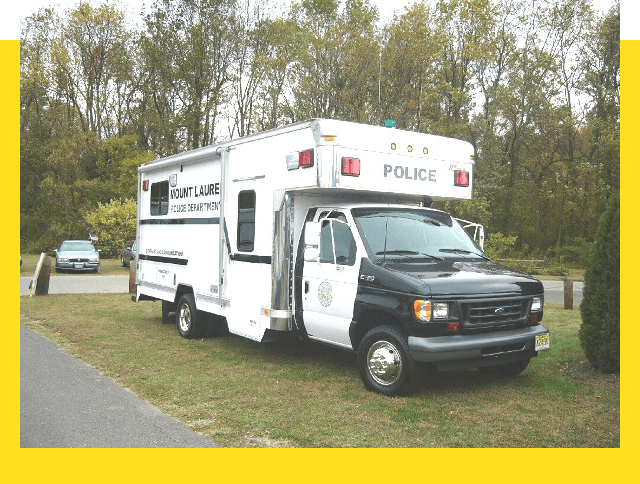 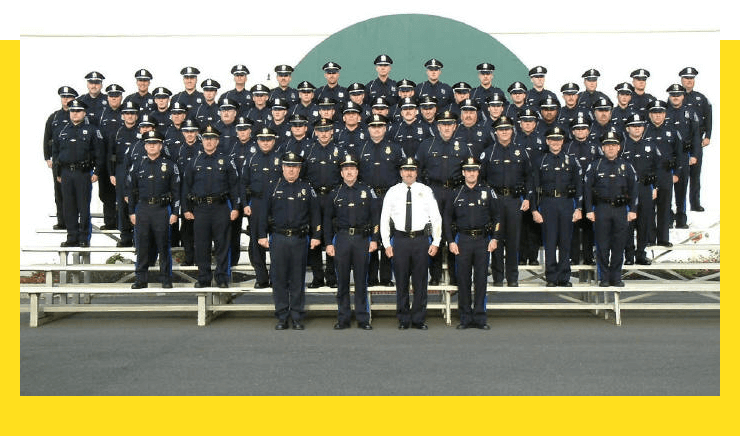 Police Uniforms Change for the first time since the 1970s from royal blue stripe and blue and white patch to more traditional New Jersey colors of midnight blue and gold. 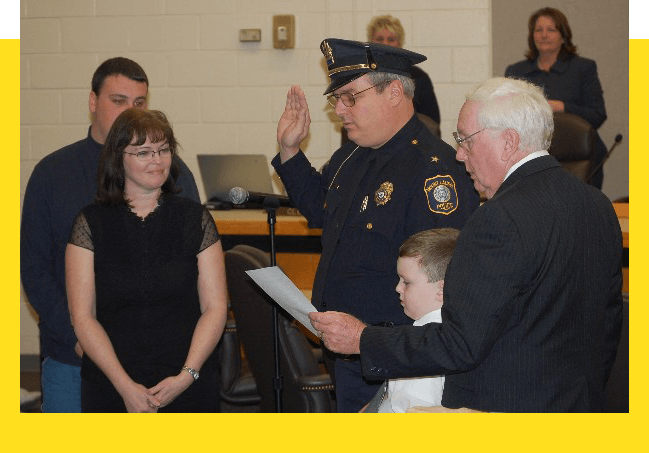 November 9, 2009 The Police Department is awarded Accreditation from the New Jersey State Association of Chiefs of Police. This prestigeous accomplishment represents years of effort and thousands of man hours dedicated to ensure the Department met 112 stringent standards of performance. 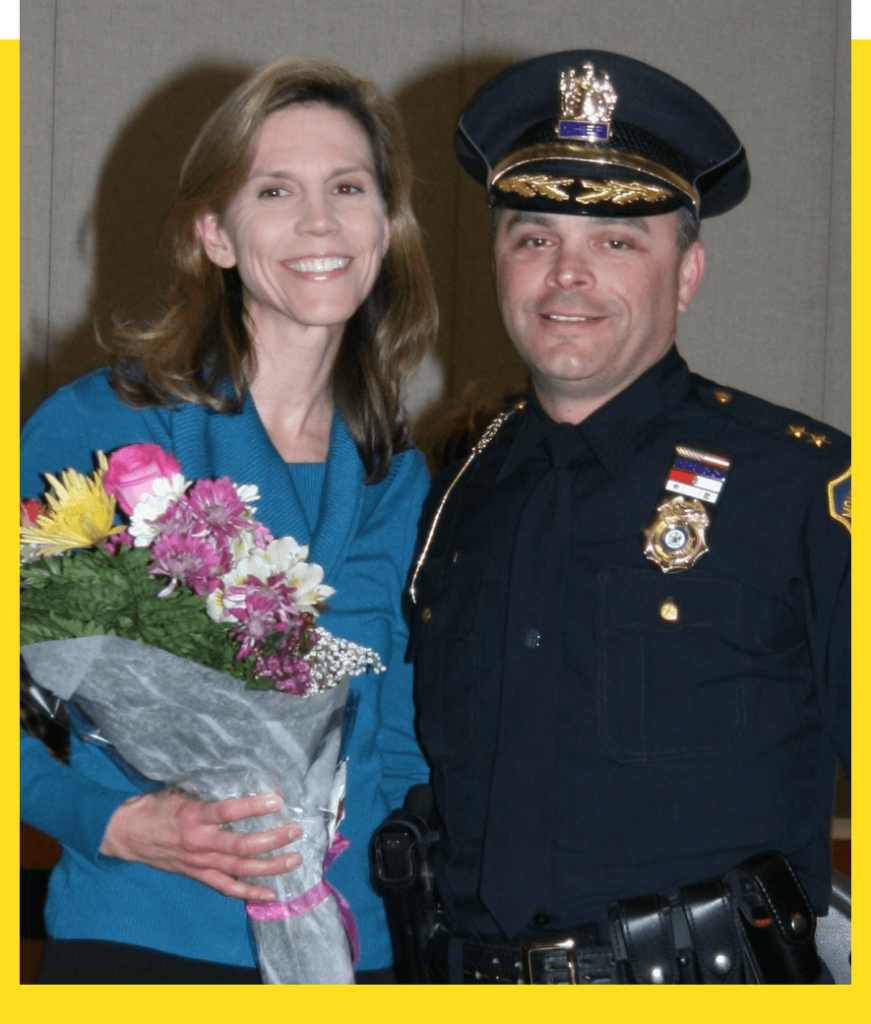 May 19, 2016 Lieutenant Stephen T. Riedener was promoted to Deputy Chief of Police. The Deputy Chief position had been vacant since July 2009.
2016: 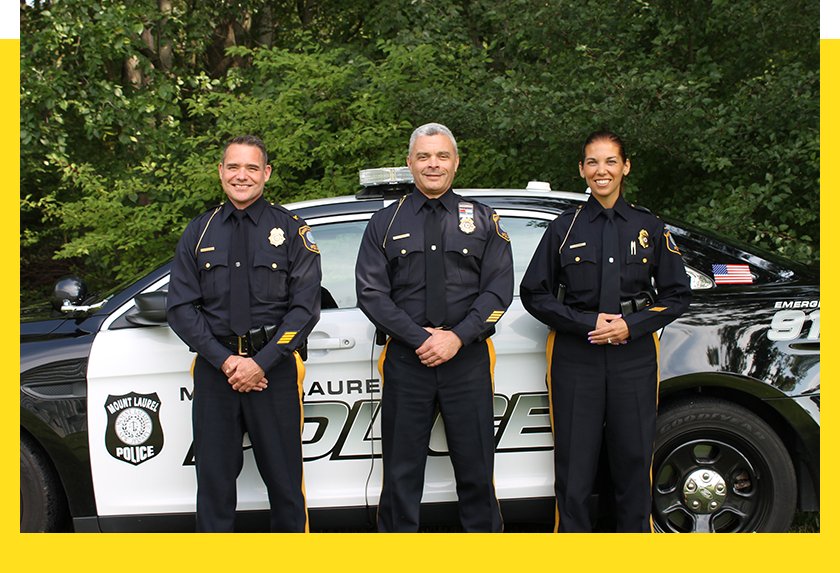 Please support our brave K-9 service dogs and make a donation to help fund the care and training of our loyal team. Leave a message below and one of the K9 team members will contact you with further details.

Public demonstrations, public appearances, and meet and greets can be requested by clicking on the link below and filling out an invitation form.